Closed. This question is off-topic. It is not currently accepting answers.

Want to improve this question? Update the question so it's on-topic for Stack Overflow.

Are there any professional Combobox controls (dropdown list with autosuggestion) based on the jQuery library?

It should be able to handle large datasets and have some skinning options. A multi-column result list would be great too. I'm working with ASP.NET, but it's a not a problem if I had to write a wrapper for it. 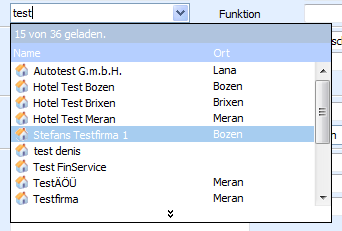 I'm already using a third-party control, but I ran into some compatibilty issues between two vendor's controls. Well, I want to get rid of this kind of dependencies.

Unfortunately, the best thing I have seen is the jquery.combobox, but it doesn't really look like something I'd really want to use in my web applications. I think there are some usability issues with this control, but as a user I don't think I'd know to start typing for the dropdownlist to turn into a textbox.

I much prefer the Combo Dropdown Box, but it still has some features that I'd want and it's still in alpha. The only think I don't like about this other than its being alpha... is that once I type in the combobox, the original dropdownlist items disappear. However, maybe there is a setting for this... or maybe it could be added fairly easily.

Those are the only two options that I know of. Good luck in your search. I'd love to hear if you find one or if the second option works out for you.

Here's one that looks very promising. It's a true combo - you see what you type. Has a cool feature I haven't seen elsewhere: paging results.

Anyone looking for a jquery "combo box" seems to be directed to this question. My post is for people coming to this page to find a "traditional" combo box, rather than an answer to the original question. The above solutions all focus on using the input as a means to filtering and autocompleting to an existing select value. (great for large datasets)

If you're looking for the traditional combo box, which is simply "Type something or select from these pre-defined values" (no we won't hide the ones that don't match while you're typing), all you may need to do is

Should be easy to wrap this into a plugin that converts an existing select tag, though I haven't seen that done yet.

P.S.: The main problem I see with "jQuery Editable Combobox" is that it remains a select list, and it is not obvious at all that you can just start typing something new.

A new fork of the sexy-combo project is now out which looks promising: http://code.google.com/p/ufd/

For large datasets, how about JQuery UI Autocomplete, which is basically the "official" version of Jorn Zaeferrer's Autocomplete plugin?

I also wrote a straight JQuery combobox plugin that's gotten pretty good feedback from its users. It's explicitly not meant for large datasets though; I figure that if you want something that prunes the list based on what the user types, you're better off with Jorn's autocompletion plugin.

Another nice plugin is Sexy Combo

This is also promising:

If you don't need multi-column, chosen is another good choice. MIT Licensed

I found this other one: http://code.google.com/p/jquery-jec/

I'm looking for the same. The one I liked most till now is this one for ExtJs - except I havent tested it with large Lists: www.sencha.com/deploy/dev/examples/form/combos.html

Here is another really(!) fast one: http://jsearchdropdown.sourceforge.net/

For example the SexyCombo works quite fantastic but is way to slow for longer lists. The SexyCombo folk UFD is a lot faster, but initialization time is still quite slow for really huge lists. Besides I get sometimes some little! "flashing". But I guess there will be some updates in the near future.

Sexy-Combo has been deprecated. Further development exists in the Unobtrusive Fast-Filter Dropdown project. Looks promising, as i have similar requirements.

Why don't you try http://jqueryajax.codeplex.com/. It is a collection of ASP.NET controls that contains multicolumn drop down as well.

Activewidgets has a very nice looking one. No idea how well it performs on large datasets. http://www.activewidgets.com/ui.combo/

I had the same problem, so I ended up making my own.

It has a template system built in, so you can make the results look like anything you want. Works on all major browsers and accepts arrays & json objects. http://code.google.com/p/custom-combobox/

Here's a really cool one: http://www.xnodesystems.com/ The Dynamic List Field not only has the autocomplete capability, but also is able to do validation.

I've tried http://jqueryui.com/demos/autocomplete/#combobox and the problems faced were:

As a result I've tweaked it a bit and it worked fine for me in ASP.NET MVC. My version of CSS and widget script can be found here http://saplin.blogspot.com/2011/12/html-combobox-control-and-aspnet-mvc.html

Sample on binding MVC model to custom value is also there.

Very nice with many features including localization.

all what you need http://jquerycomboboxtmpl.codeplex.com/